I am a Hip-Hop/R&B artist from Lancaster, PA.  Lancaster is a super cool place, the city of Lancaster really embraces music and art.  I grew up in Lebanon, PA (which is like 35 minutes away), but started my music journey in college in Lancaster and have lived there ever since.  Lancaster is very different from Lebanon in that is celebrates and showcases art and music, which definitely made it easier for me to start making music.

All three are kind of older songs of mine, but they still showcase my ability to make several different types of records, Hip-Hop, R&B, Pop, Electro, and whatever else I am feeling.  Genre wise, based on my newer music I would consider myself a blend of Hip-Hop/R&B/ and Pop music.

Moments of self-doubt, trying to figure out how to maneuver in an industry I initially knew nothing about, and gaining the self-confidence to put myself out there.  I’ve always been the type of guy that internally battles with myself, I’d consider myself to be my worst enemy sometimes. I think my latest EP release “Nights on Vine” really embodies those moments.  Those times when I didn’t really like myself, or when I haven’t felt good enough for some reason; which are all things I am working on not just as an artist, but as a human being. But those moments and internal battles really shaped me into the artist I am now, and the music I have been releasing.  Initially I was kind of afraid to put those emotions out there because I’ve never openly expressed those before, but now that I have it feels great and the fans have really related and connected with what I’ve talked about.

I just love it, I am legit obsessed with making music and the business side of building a brand and fanbase.  I honestly feel extremely lucky to have discovered my passion at a younger age in life, some people never find that thing.  Watching people connect with my music and seeing that impact grow as my brand grows is amazing to watch. Music is a universal language, and I’ve discovered that the stories of my hardships can help other people get through their struggles, which is so amazing.

What’s Your Current Project and/or video/song your are promoting?

I am currently pushing my latest EP titled “Nights on Vine”

Description: “Nights On Vine” is a collection of stories about low moments I’ve went through over the past two years.  The EP starts off laying out and details some of the internal battles I have with myself and the songs “Far From Home” and “All Here” really ebody those struggles.  Then towards the end the “Interlude” and track “Bad” provide a triumphant type ending. That transition from more emotional/somber tracks to more upbeat/triumphant music was meant to create the feeling of going through struggles and overcoming them.

Hmmmmm, great question.  I would love to work with Mike Posner.  I love his songwriting, I love his production, and just how much he openly expresses himself in his music and in his public image.  He definitely has struggled with things in the past (and probably still does), but fully embraces who he is and is always trying to better himself; which I really connect with.

Be patient, believe in yourself, and study branding.  Making it in the music industry is so much more than just making good music.  Being able to weather the mental storm that comes with being an artist and trying to make it in the business is a huge thing; that is where you have to believe in yourself no matter what, even when no one else does.  Understanding that you should never compare yourself to others (even though I am guilty of that from time to time) and always just focus on your music, your journey, and your process.

Continuing to build the fanbase, touring at the top of the year, and finishing up my next EP titled “Purple Heart” which I am going to release in the Spring of 2019.  After 8 years of grinding, the gears are finally turning and things are growing on their own; so it’s full speed ahead!

One thought on “Michael Wavves checks in with WeTrapMusic.com | Q&A (Interview)” 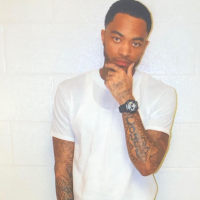