Today, singer-songwriter jxdn debuts his new single “Angels & Demons” via DTA Records – LISTEN HERE. The intoxicating track showcases his dynamic vocals over Barker’s signature production and drums. The music video, directed by Ari Nissenbaum, gives a visual component that reflects the duality of the song’s lyrics, which were co-written by jxdn alongside Barker, McKay Stevens and Keith Varnon. WATCH HERE.

“I’m bringing rock back!!! You’re gonna hear it with a lot of music/artists I’m producing and signing to my label,” Barker says. “jxdn is an artist I’m really excited about and is the future of DTA RECORDS!”

“I just wanted to change the world with my music. No better person to do that with than Travis,” jxdn says of the new music and signing.

“Angels & Demons” follows the 19-year-old’s self-released debut single “Comatose” which has found rapid success since its February release. “Comatose” has currently peaked at No. 27 on Billboard’s Hot Rock Chart, has amassed more than 20 million streams across platforms and reached 35+ global viral charts to date. Its music video has been seen more than 6 million times.

About jxdn:
Defying the rules with style and substance, jxdn bends and breaks the boundaries as he moves between subcultures in a very genuine way to position himself as a new kind of rockstar. Generating 15 million streams within a month and becoming the first artist signed to Travis Barker’s DTA Records, the 19-year-old genre breaker presents a signature style on a series of 2020 releases. Born Jaden Hossler in Dallas, TX, jxdn struggled to find his voice in high school as an outsider.  In 2018, he took control and developed a presence online through a consistent stream of engaging and clever content. He quietly exploded on Tik Tok, attracting 5.8 million followers and 202.3 million likes. After witnessing an arena show by the late Juice WRLD, he dove headfirst into music and unleashed his independent debut single “Comatose.” The track has since racked up over 20 million streams across platforms and broken into over 38 Global Viral Charts to date. Upon hearing it, Barker immediately signed him to DTA Records. Now, jxdn takes flight on the single “Angels & Demons.” 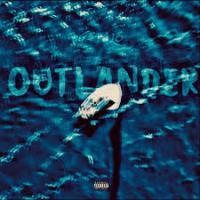